Liverpool aren’t messing around this summer, as they have already brought two new signings in. Fabinho will join from Monaco for £43.7m, while Naby Keita will also join the club in a £48m deal from RB Leipzig. The Keita deal has been done for a long time, of course, but it’s really positive that these players have been signed. I don’t think the Fabinho signing is a reaction to losing in the Champions League final, as some are making out, but well done to Liverpool for getting it done so early. They also kept the deal very quiet, as there wasn’t too much said about it until just before it was announced.

Fabinho seems to be a direct replacement for Emre Can, who seems certain to leave the club. He is reportedly due to have a medical with Juventus soon, and that’s something that he could have done already. He’s definitely going to leave anyway, so Liverpool have done their business quickly and got a replacement sorted.

I think improvement in the midfield was huge for Liverpool. Their midfielders have done extremely well, and are really hardworking, but Milner, Henderson and Wijnaldum hardly terrify the opposition. I don’t mean any disrespect to any of those, as they are all fine players, but I think an upgrade was needed. Alex Oxlade-Chamberlain is out injured, of course, but even with him fit, I think they needed something extra.

These two signings should really help them push on, and they should get a lot more from their midfield next season. It’s very positive for Liverpool.

I would be surprised if their spending stopped there though. They could do with a new ‘keeper and a new centre half. It would obviously be harsh to tell Loris Karius that he’s being replaced, especially with how he must feel after Saturday, but it’s probably something that has to be done. I have actually been really impressed by Karius over the last few months and I think he has been playing very well. He has that mistake in him though, as we have seen a few times before. I’m not sure if that’s something Jurgen Klopp can help him remove from his game. We’ll see what happens, but I wouldn’t be surprised if they brought in Jack Butland or someone along those lines.

Another centre half would also be very beneficial to them, I think. They were so much better after Virgil van Dijk joined in January, and he really helped shore that defence up and make it much more solid. Dejan Lovren has also upped his game considerably, and has been quite impressive. He had a really good game in the Champions League final, even after everybody said that he would be the one to be punished. Even with his good form, I still think Liverpool could bring somebody else in. There’s definitely potential there for an upgrade.

Will they spend another £60m or so to bring in a goalkeeper and a centre-half? I’m not so sure. They’ve already spent almost £100m on Fabinho and Keita, so maybe it’s unrealistic for them to fork out another big chunk of change. Their prize money and TV money would have been high this season, with them finishing fourth in the Premier League and getting to the Champions League final, and they also have ‘the Coutinho money’. There’s not much of that left at this stage, but the Reds definitely have the funds to fork out a bit more on another couple of players.

I really think that if they were to sign a top quality goalkeeper and a top quality centre half, they could challenge for the league title. They finished 25 points behind Man City last season. I’m not for one second saying that bringing some new faces in will make them win an extra 25 points in the league next season, but I’m going on the assumption that Man City won’t be as good as they were last season. If they are that good again, everybody can forget about it. There’s absolutely nothing anybody could do, as they’ll walk to another title.

I can see them winning the title again, as they’re just so good and I don’t think Pep Guardiola will let standards slip too much. But we usually see the champions drop off, even just a little bit, and that could be enough for somebody to put some pressure on them. If they aren’t as good as they were last season, I really think Liverpool could be the ones to really put some pressure on them. I’m not saying the Reds are going to win the league, but I think they could be in a strong position to challenge. Of course, City could just be amazing and have the league won by Christmas again. It’ll be interesting.

We have seen that Jurgen Klopp can get the very best out of the players he has there, and he’ll be getting the best out of the two new lads as well. I’m looking forward to seeing how they get on. There’s nothing better than some new signings, and Liverpool fans will be feeling excited for next season. They could really help push Liverpool onto the next level.

We’ll see if they will go for more reinforcements soon. It’s always nice to get your signings done early, as it allows them to come in and have a full pre-season with their new club and get to know their new team-mates and their surroundings before the season starts. It can really help them bed in and can make things a lot smoother for everybody involved. Liverpool have done their business really well so far.

I have just seen that Raheem Sterling has got a new tattoo, which is a large M16 rifle down his right leg. Of course, people jump to criticism immediately, saying it’s not good enough and that he’s a bad example because of gun and knife crime in England and all the rest. Nobody thinks that this might have a meaning, which it clearly does as Sterling explained in a post on Instagram. 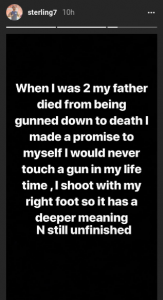 Maybe people could be just left alone? What difference does it make to anybody that he has a tattoo of a gun? People say he’s a bad example, but is he really? Are there really children out there who will think they have to go and get guns now because Sterling has a tattoo of one on his leg? I don’t think so. It’s shit rag newspapers going with this (I’m looking at one horrible rag in particular) who should just shut the fuck up. How people still buy those papers is beyond me. Everyone knows they’re horrible cunts. Stay away from them, you can do better.

Anyway, sorry for a bit of an angry rant and some bad language first thing in the morning. I’m not an angry person, not in the slightest, but things like that annoy me just because they’re so ridiculously stupid. Anyway, that’s it from me for this morning. I’ll be unavailable for a few hours this afternoon so there won’t be news on Twitter for a while. I’ll catch up with whatever news I missed when I get a chance though. I’ll be back in the morning, so drop back in for that. Have a good Tuesday.

Rafa Benitez is an exceptional manager who has had an impressive career. The Spaniard has won trophies in Spain, England and Italy, and has had a lot of success throughout his time as a manager. More

Liverpool and Spurs play an Anfield today in the late game of the day. It kicks off at 4:30pm. Liverpool are third in the table, while Spurs are fifth. Liverpool go into this one off More

Good morning and welcome to Monday. It’s a really quick one this morning as I have quite a lot to do today. Sorry it’s late as well. Yesterday began with Spurs beating Crystal Palace 1-0 More